At the age of five her mother started teaching her how to play the piano, and it was after her mother that she inherited a talent for music and absolute musical hearing, at the age of six she started playing the violin, she was also devoted to ballet, she started composing at the age of thirteen. After graduating from the high school in Nový Bydžov (1958) she was accepted into the third year of the Prague Conservatoire where she studied composition under Miloslav Kabeláč (1958-61), she continued at AMU under Emil Hlobil (1961-66) and continued with postgraduate education once again under Miloslav Kabeláč (1968-72). In an audition (1970) she received a scholarship from the French government for the study of composition at the Conservatoire de Paris under Oliver Messiaen and André Jolivet. At the same time she had an internship in an experimental study Groupe de Recherches Musicales in Centre Bourdan with ORTF under Pierre Shaeffer (1971). After completing her studies (1972) she devoted her time to composing as a freelancer, she cooperated with theatres, radios and the film industry and also occasionally spent her time on theoretical and educating activities. 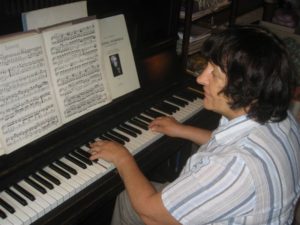 Ivana Loudová is an author with a personalized and distinctive creative expression in which she focused, from the very beginning of her artistic career, on a wide range of expressive elements and on the procedures of modern musical language especially concentrating on modality and tectonics. She mainly focused on chamber, vocal and symphonic music, a significant part of her musical work is devoted to compositions for children. In 1933 she received an annual award Heidelberger Kunstpreis (SRN) for her work.

By the end of 2014 Ivana Loudová had created over a hundred compositions. Among her most famous orchestral pieces are Spleen-Hommage à Charles Baudelaire and Choral for the orchestra, which both became an inspiration for over 500 pieces of artwork exhibited in Munich at the Vom Ohr zum Auge exhibition (1994). Furthermore two symphonies, Concert for the chamber orchestra and ballet music Rhapsody in black. From her chamber compositions Air à Due Boemi for bass clarinet and piano, Gnómai for soprano, flute and harp, String quartet No. 2 “Památce Bedřicha Smetany” (in memory of Bedřich Smetana), Nocturne for viola and strings, Monument for organ, Veni etiam for six woodwind instruments, Planet of birds I-III using electronics, Cnto solitario for solo violin, song cycle Lunovis. Young performers are fond of her Prelude for the piano and sonatas with piano (with violin, clarinet, and trombone). From vocal compositions it is Kurošio- a dramatic fresco for solo soprano and a large choir, Small Christmas cantata for the children’s choir, trumpet and harp, Italian Triptych for chour, Fortune for mixed and children’s choir, Harmony du soir for chamber mixed choir, cantata for solo, children’s choir, recorder and percussion Mudrosloví, Message for a large boy’s choir and others. Her book Modern notation is still very requested and so is her interpretation. On this topic she has organised many lectures, she has taken part in international symposiums in Paris, Heidelberg, Kassel, Dresden, Fiuggi, Šamorín and elsewhere.

Concerning competitions in her home country (Jirkov, Jihlava, Olomouc, Most, Praha) and abroad (Manheim, Arezzo, Verona, Mantova) she has received various prizes, many of her compositions were published (Panton, Editio Supraphon, Editio Bärenreiter Praha, Peters, Schirmer, Alea Publishing, BIM Edition, Edizioni Suvini Zerboni, Schott) as well as on the sound carriers. In 1998, Panton published her CD in an editorial series Protokol XX, including a variety of orchestral and chamber compositions. In 2009, composer Jan Klusák published (via publishing house JK XXI Prague) double album with recording of her solo compositions (Music for One) and a duet (Music for Two), for the Year of Czech music in 2014 the Musical information centre published a CD with recording of her newer compositions (Sinfonia numerica, Forgetful angel, Canto solitario, Good Samaritan, Planet of birds III, Double concertfor the violin, percussion and strings).

On the festival Prague spring several of her compositions had their premiers among them: Veni etiam (1996), Mudrosloví (2004) or Sinfonia numerica, which was ordered by the festival for Mozart’s anniversary (2006). For the International interpretation competition Sonata angelica for trombone and piano (1997) was formed as well as Canto solitario for solo violin (1993). Abroad the premiers of the following compositions were introduced: Ad caelestem harmonium for the 900 anniversary of the birth of Hildegard von Bingen on the festival in Fiuggi (1998), Strings quartet No. 3 “Renaissance” in 2002 in the Arabic Muscat (Sultanate of Oman), the song cycle Lunovis & u.s.w. on the festival in Salzburg (autumn of 2005) along with many others.

Between the years 1980 and 1997 Ivana Loudová worked as a ‘composer-in-residence’ under American Wind Symphony Orchestra (Pittsburgh, USA) for which she wrote many compositions (Chorale, Hymnos, Concerto, Magic concerto, Dramatic concerto, Luminous voice).

Since 1992 Ivana Loudová has been teaching composition and musical theory on the musical faculty AMU (1994 docent, 2006 professor). Among her students are composers Zdeněk Bartošík, Radim Bednařík, Jakub Dvořáček, Matin Klusák, Jiří Lukeš, Roman Pallas and others. Her classes on HAMU were also attended by students from abroad with internships. As a hosting professor she lead master composition courses in Germany (Unna) and Austria (Eldach-Reichenau), moreover she is often invited to international competitions to sit among the judges. Since 1996 she had been leading the AMU studio of modern music “Studio N” with which she works on several activities (lectures, seminars, concerts) in the area of discovering music of the 20th and 21st century, which are open to the public.